Methods of East Asian Classical Studies, 59th Seminar
The Frontier of the Realm of Chinese Characters

“East Asian Classical Studies” is a project we perceive on the whole as the practice of creating, comprehending, annotating, modifying, and studying about the “classics” that were born out of, and read in, a sphere of knowledge centered on reading and writing in kanji. It seeks to elucidate the construction of the “East Asian Classical World” as a sphere of reading and writing, describe that history, and share such knowledge. This project, which has been advanced with the support of grants for scientific research (KAKENHI), made a fresh start this year as the “Development of the Next Generation of East Asian Classical Studies through International Collaboration: From the Perspective of the Frontier of the Realm of Chinese Characters.” (Base A) This project focuses on “the frontier of the realm of Chinese characters,” that is, the aspect where a realm of characters is formed within a realm of non-characters or a realm of other characters, or the area comes into contact with the borders and realms of non-characters or other characters. While examining various phenomena, including texts written in characters other than kanji, we will aim to clarify various aspects in mechanisms of formation and construction. In this seminar, which serves as a kick-off event to the project, we will discuss the themes of the project through a dialogue based on the various research and perspectives of each project member.

10:30 – 12:00 Session I
“The Empress Consort Jingū Chronicle as a Passage,” Kanazawa Hideyuki (Hokkaidō University)
“The Role of Yamato Kotoba in Commentaries on the Nihon shoki,” Tokumori Makoto (University of Tōkyō)

15:15 – 16:45 Session III
“The Works of Wang Bo in Japan and Excavated Epitaphs: The Foundation of Early Tang Literature,” Michisaka Akihiro (Kyōto University)
“The ‘Classics’ as External to the Realm of Characters,” Saitō Mareshi (University of Tōkyō)

As a kick-off event for KAKEN’s “Development of the Next Generation of East Asian Classical Studies through International Collaboration: From the Perspective of the Frontier of the Realm of Chinese Characters,” which started from this year, there were presentations and discussions from members of the project.
Below is a report by the participants. In addition, some changes have been made at the time of posting. 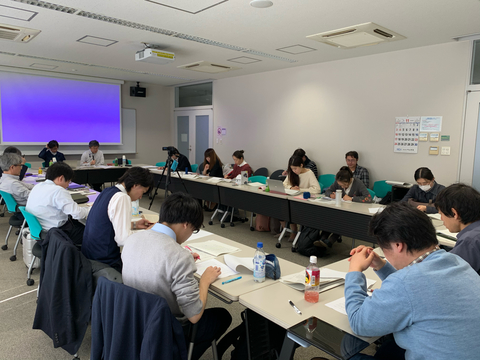 [First Session]
Professor Kanazawa’s presentation dealt with the chapter on Empress Jingū in the Nihon shoki and, using the production of texts based on the Empress Jingū chapter (setsuwa) such as the Hachiman gudōkun as its starting point, sought to explore descriptions of the Nihon shoki within those texts. First, it was pointed out that the Empress Jingū chapter was a record with connections to the Wajin den and the Qijuzhu, and therefore they can be regarded as rerences points for the dates of the chapter in the Shoki. Then, he argued that the Empress Jingū chapter functioned as a path that connected the history recorded in the Nihon shoki with a moment in world history. Setsuwa about Empress Jingū, including literature besides the Shoki, are told in various forms, but the person who enacted those feats are said to not be Empress Jingū herself, but her son Emperor Ōjin. For example, in a passage dated from the twelfth month of the sixth year in the Nihon shoki’s Keitei chapter, it says “Sumiyoshi no ōkami first conferred the gold and silver countries across the sea, including Goguryeo, Baekje, Silla, and Imna, on Homuta no Sumeramikoto [Emperor Ōjin] while he was in the womb.” In regard to this point, it was stated during the discussion after the presentation that, while up until the Heian period there was a tendency to imagine Empress Jingū’s achievements as her own, after that they became accepted as those belonging to Ōjin, and as seen in the Hachiman gudōkun, they are even connected to the figure of Hachiman.
Professor Tokumori’s presentation focused on the development of commentaries on the Nihon shoki up until the medieval period. First, he presented the opinion that kun glossings using native Japanese words dispensed throughout the Nihon shoki are based on context, and that the Shoki’s entire narrative points to it as being a translation of a native Japanese narrative into kanbun. Next, regarding Heian period interpretations of the Shoki, he showed that unlike Motoori Norinaga they did not obsess over kanji expressions and aim to return to an “ancient language,” but pursued reading it with kun glosses while respecting that the Shoki as a text written in kanji. Lastly, he touched on the fact that, regarding Ichijō Kaneyoshi’s Nihon shoki sanso, its annotations and understanding of the Nihon shoki did not inquire about kun glossings, and stated that this was something that “changed the function of kun glosses.” Regarding this part, during the discussion following the presentation, there was a supplementary explanation that, in contrast to the Heian period interpretations that aimed to provide a consistent explanation of the Nihon shoki through the native glossing of Sinitic language, the Sanso and Yoshida Kanetomo’s Nihon shoki jindai no maki shō construct a space for interpretation in the Japanese language, and as a result connected the text to a world that expands beyond the world of kanji.
I was particularly interested in issues of “narratives in Japanese” with regard to “Japanese language in commentaries on the Nihon shoki.” Considering the problem of the old Japanese language, there are two languages consisting of written and phonetic language, and in Japanese language studies that sentences in the Japanese language such as wabun and kanabun were pointed out to be the latter, close to everyday conversational language during that time period.
In Japan during the Nara period, when the Nihon shoki was created, was it possible to “narrate using the native language?” (How much was it possible, if at all?) The problem is complicated and difficult to understand and has also been considered in a variety of ways including from the perspective of literary style and literary history, which is bigger than “language.”
However, it also seems that the writing of native Japanese words without the mediation of “(orthodox) kanbun” could take place only in poetic expressions such as those in the Man’yōshū. Reaching the point where native Japanese language that was naturally supposed to be used in spoken language directly took the form of written language and to a certain extent was described using a fixed amount had to wait for the establishment of wabun and kanabun in the Heian period.
When thinking about such a thing, Komatsu Hideo’s point that, “The important thing is not kanabun’s development by means of the creation of kana, but that kana was developed in order to compose kanabun,” (Nihongo shoki shi genron – hoteiban, Chapter 1, “Kanabun no hattatsu”) is quite suggestive. Although at this time I do not happen to have the material on hand to judge the validity of this point, after thinking about the relationship between “writing” (the act of writing) and “what is written” (the original text), this is a viewpoint we ought to keep in mind.
In addition, in the discussion after the presentation, it was argued that fluid “oral traditions” (which do not have a fixed text), became fixed through the act of writing, starting from statements such as “in this text…” Such an argument concurs with Watanabe Minoru’s point that “sentences should construct a closed linguistic world as written language. When converting into written language content given in the form of oral language, isn’t it a fact that it would also produce evident differences in making a closed linguistic world due to the difference in how to grasp the content of the sentences?” (Heian chō buntai shi), and I think these overlaps with questions about what is created (or destroyed) when things that have only been told through forms of sound and orality are fixed in (and converted to) text.
(Kawano Tomoya, MA Student, Hokkaidō University) 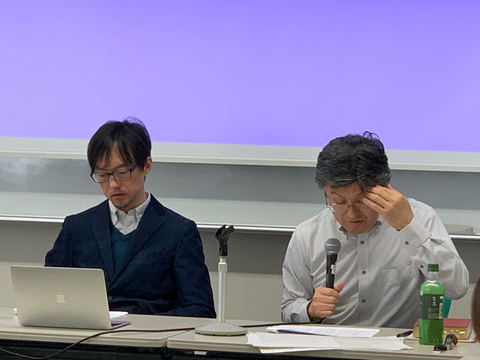 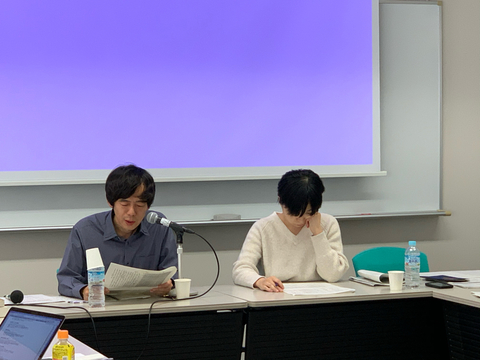 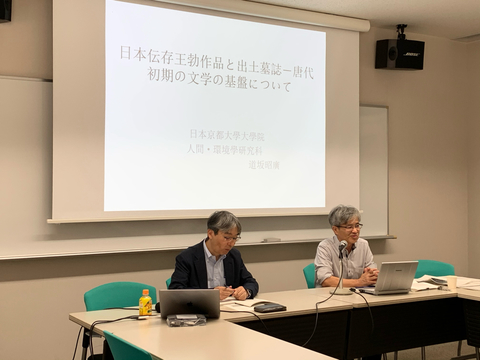