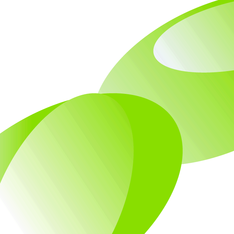 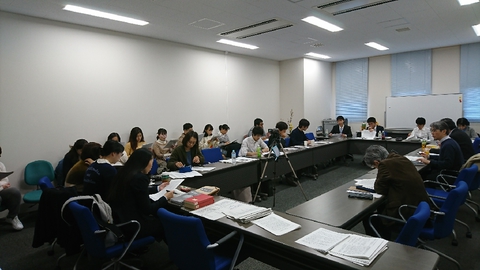 First, Maeda presented on issues surrounding the formation of Suwa Enchū’s Illustrated Record of the Suwa Daimyōjin (1356). Maeda noted that the illustrated record that records the origin of the Suwa Shrine in Shinano was created in Kyōto, and stated that the activities of the Urabe clan, a Kyōto-based Shintō family, were involved in the formation of the Illustrated Record. Specifically, he points out that, in regard to quotations of the Sendai Kuji Hongi in the Illustrated Record, the use of the Kuji Hongi is based on the teachings of Urabe (Yoshida) Kanetoyo, and the quotations in the Illustrated Record overlap with the Annotations on the First Volume of the Kojiki, speculated to be connected to Urabe Kanesaki, who was responding to Kanetoyo along with Enchū. He argued that the text of the Illustrated Record can be thought of as having formed using extracts from materials made in reference to a particular Shintō shrine.
In response to Maeda’s presentation, the commentator Hanakawa pointed out that Urabe Kanetoyo existed in a position to shift the leadership of the Urabe clan from the Hirano branch to the Yoshida branch. Afterwards, they opened the floor to questions, and there was discussion about whether the role of Shintō families at the time was to grant authority to local Shintō shrines using literature in one’s possession, and might that authorization have been used in decisions about one’s position within the Shintō families? 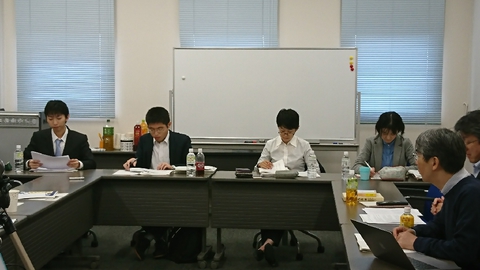 Next, Kawashita presented on the reception of jōruri in Confucian scholars during the Bakumatsu period, as seen in Ebata Gorō’s (Naka Michitaka) Grammatical Shortcuts (1881). Kawashita argued that Gorō, who enjoyed jōruri as a tool for lamenting over the evils of the times, compiled Grammatical Shortcuts by imitating the teaching methods of his mentor Morita Sessai, and along with this showed what kinds of works were adopted for Grammatical Shortcuts, and how grammar was explained in the text. Finally, Kawashita touched upon the fact that Gorō in another place introduces the anecdote about Sessai’s teacher Rai San’yō’s use of popular songs to teach shi poetry, and pointed out that we can see Grammatical Shortcuts as a book that shows Gorō’s scholastic inheritance from San’yō and Sessai.
In response to Kawashita’s presentation, the commentator Nijō asked about the origin of the terms used to explain grammatical rules in Grammatical Shortcuts. In response to this, from the floor it was pointed out that there were two supposed trends, which were sentence criticism in texts such as the Eight Masters of Tang and Song, and novelistic criticism as represented by figures such as Jin Shengtan. And, there was discussion about how the reception of jōruri by Gorō was a similar phenomenon to the reception of the novel by kangaku scholars contemporary to Gorō, such as Yoda Gakkai and Ishikawa Kōsai, and if Rai San’yō’s Nihon Gaishi can be seen as a translation into kanbun, and if that trend of kanbun translation contributes to the elevation of popular literature such as the novel and jōruri’s social standing before the publication of The Essence of the Novel.
Though the time periods handled were different, the two presentations on Shintō families in Kyōto and local shrines, and kanbun and jōruri, were fascinating to witness, and made the audience think about books that were created spanning two different regions, and the activities of the people who made those books.
(Tobita Hidenobu, PhD Student, Tōkyō University)