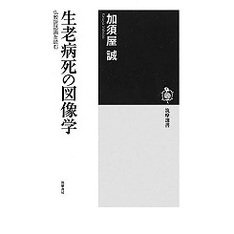 The third session in our series, “Meet the Author,” was held at Tokyo University’s Komaba Campus on Friday, July 27th, 2018.
First, Professor Saitō Mareshi gave an explanation about the intent behind this workshop. “Meet the Author” is a project started by the East Asian Classical Studies program last year, where scholars at the forefront of their fields of research are invited to engage in a dialogue with young researchers on the subject of their works, and where awareness of issues are shared along with new research and methods in East Asian classical studies.
In the workshop’s third installment, Professor Kasuya Makoto was invited to speak on his book, The Iconography of the Four Inevitables in Human Life—Reading Illustrated Buddhist Setsuwa (Chikuma shobō, 2012). The discussants were Professor Nagai Kumiko, PhD candidate Kitagawara Erin, and graduate researcher Gong Lan, all from Tokyo University. 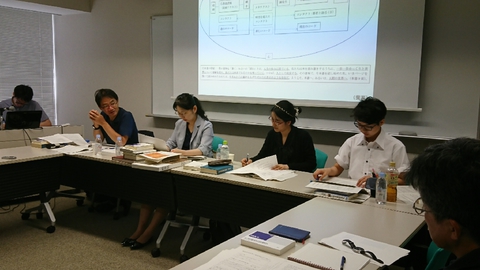 First, as his self-introduction, Professor Kasuya gave an explanation of how he came to his current specialization along with an outline of his research. Moreover, he proposed as his goal for the workshop that, we try to come to an understanding through discussion topics such as the question, “what is the study of art history?” along with the effectiveness and joy of studying art history within the humanities.
After his self-introduction, Professor Kasuya talked about the representation of women as seen in illustrated Buddhist setsuwa. In regard to the figures of women that appear in things such as illustrated Buddhist setsuwa, the beautiful woman drawn in the painting of “The Nabekaburi Festival” (a festival where a woman wears on her head a pot with the number of men with whom she’s had relations) is one who is implied to be connected to yūjo, and she is a woman whose figure is used as a means to judge women who have experience with many men as indecent. Moreover, “Okame” is an illustration where the woman is depicted as the head of the house, showing that women in the seventeenth century were criteria for judging whether men were useful or not. Professor Kasuya showed us how to understand all this by reading literary works from the same time period.
Then, with Professor Nagai moderating, the discussion began. This session’s discussion was composed of five different categories: “prologue: methodology,” “pain of being born,” “pain of aging,” “pain of disease,” and “pain of dying.”
In regard to the theme of the prologue, there was discussion about things such as the object of inquiry and standpoint of research, as well as whether a common code or dialogue between the past and present is possible cases where the artist and audience are positioned in different temporal contexts, starting with a question from Mr. Gong Lan.
Following this, with a question from Ms. Kitagawara, there was a discussion about how it is possible in art history to approach “the body” as being an image or object from various angles, but in studies of iconography there are problems that arise such as the difficulty to come up with an approach when thinking of the physical body in regard to time periods and regions where it is difficult to understand the supposed context, and the difficulty in measuring the logic and consistency of a reading.
With Professor’s Nagai question, there was a discussion about the difference in standpoints of comparative culture theory, and then there was a break.
Once that break ended, the discussion about “the pain of being born” began.
About the topic “the pain of being born” there was mainly discussion about how, if a baby is almost impossible to represent, it is possible to represent the body of a pregnant woman in the space between the transient world and the next world and, moreover, there was also discussion about the meaning behind the depiction of Toyotama-hime’s childbirth in the Hikohohodemi-no-mikoto illustrated scrolls, the state of research as related to “things that cannot be said” and “work that no longer exists.”
In the “pain of aging,” there were discussion primarily on the whether the connection between age and sexual desire is weak in illustrated Buddhist setsuwa since the motif of a lascivious old man does not appear in them, and whether cases where “aging” as a symbol appears in those outside the elderly should be categorized as “sickness” instead.
There was a break, and then on the topic of “the pain of suffering,” there was talk about things such as whether the dog in the kusōzu scrolls and the dog in the Kakuran no onna scroll are the same on the point that they represent the male gaze, as well as dogs as a motif for masculinity, and the emphasis on homosocial bonds in regard to Futanari no otoko.
In “the pain of suffering,” besides discussions on topics such as the development of illustrated Buddhist setsuwa on large screens during the medieval period and if those images were seen by multiple people during that time, and whether there were particular paintings where people could sense the homosocial bonds in The Ten Rulers of Hell, in regard to the appeal in The Six Realms paintings, there was talk about how one can feel not only a sense of disgust, but also as if for some reason there is a certain eroticism and concern for the body. 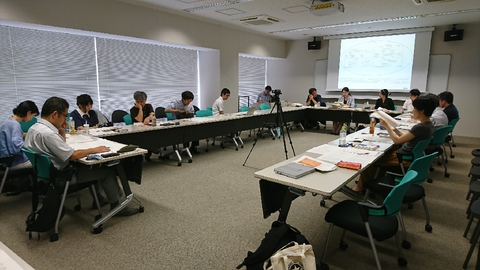 In the general discussion, in addition to discussion about the flow of time in the kusōzu scrolls, there was talk about things such as how even in regard to the question of whether there were hanging drawings before the eighth century, even though murals remain, with the influence on etoki there is a gap before and after the medieval period, and the formation of objects used for etoki. Moreover, there was discussion about how, though the object of etoki can be prescribed to gender, class, region, etc., and there are many possible readings for literary works, with visual images such as paintings, they themselves control the point-of-view, and that is related to the establishment of the spectator in the modern era.
In addition, there was active discussion about the meaning of paintings drawn on a large surface, the image as collective unconsciousness, and issues concerning the “heart” 心 (kokoro).
Finally, the third installment of “Meet the Author” came to an end with a few closing remarks from Professor Saitō.
We would like to express our gratitude to Professor Kasuya who provided space for lively discussion, the discussants, as well as all those who participated in this event.
(Matsubara Mai, Tokyo University, Project Researcher)