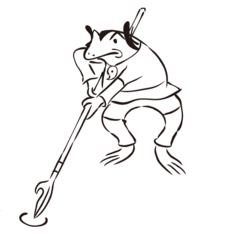 On January 19th (Friday), at the Komaba Campus of Tokyo University, we held our 36th seminar of the Method of East Asian Classical Studies. Participants consisted of members of this research group, as well as fifteen other scholars.
After Saito Mareshi, the leader of this seminar, had introduced the objectives and nature of this seminar, Baba Sayuri presented as with an introduction to her own research into the mixed orthographies preserved in Kojiki. Baba drew our attention to the fact that while the prose sections of Kojiki have been written using the semantic (kun) readings of Sinitic logographs, the verse sections have been transcribed using the phonetic (on) values of Sinitic logographs. She asserts that this orthographic distinction was a deliberate one on the part of those who compiled Kojiki. There is one exception to this rule, namely, a poem (ei) attributed to Emperor Seinei, which has been written, after the fashion of prose, using the semantic readings. Baba explains this anomaly by stating, first, that the prose sections in Kojiki were understood as reporting events then believed to have actually occurred, and, second, that the poem in question contains a description of events that were likewise believed to have been historically accurate. It is for this reason that the poem employs semantic readings, that is, as a means of immediately signifying, at the visual level of orthography, the historical accuracy of the events described in verse.
This presentation was followed by some discussion, in which Saito Mareshi suggested that the use of semantic readings in the poem attributed to Emperor Seinei might have suggested to a contemporary audience not only the truth of events described in the poem itself, but, more broadly, the entire series of events associated with the sovereign. Kanazawa Hideyuki noted that, were we to ignore the label of “poem” (ei) appearing before Seinei’s verses, and focus solely on its content and form, we should be tempted rather to look at the piece as the sovereign’s own speech (serifu) rather than a poem. Looked at in this way, we are then led to ask whether this “poem” is actually a poem at all. Perhaps, suggests Kanazawa, our assumed dichotomy of prose versus poetry does not apply here. One of the participants invited us to think of this piece as a poem in which elements of prose have been interwoven. Saito, noting the use of the prefatory phrase “Thus sang [the sovereign]” (eijite iwaku), argued that the decision to use semantic readings for this particular piece might have been influenced by continental (Chinese) notions regarding the difference between two forms of poetry, namely, yong 詠 (J: ei) and ge 歌 (J: uta).
After a short break, the seminar continued with a presentation by Tokumori Makoto, in which he offered a possible interpretation of the phrase “the three teachings [of Buddhism, Confucianism, and Daoism] are in harmony” (sankyō icchi) found in Ichijō Kanera’s Nihon shoki sanso. Tokumori presented us with an overview, first, of how this phrase has been understood in the wider exegetic tradition, and second, how the concept of deity (kami) has been explained within the Nihon shoki sanso itself. During the discussion that ensued, Kanazawa asked, first, where exactly in Nihon shoki sanso had Kanera presented the concept of deity alongside those of principle (ri) and substance (tai), and, second, what exactly was the relationship between hongaku shinshin 本覚真心 and arayashiki 阿頼耶識. Some discussion regarding these questions followed.
Saito invited us to examine more closely the significance of exegetical endeavors: what exactly does it mean to provide a commentary to a base text? In this vein, he suggested that the interpretation of the phrase sankyō icchi could be approached from the perspective of a larger exegetical project. Saito proposed that one of the salient features of Nihon shoki sanso lies in the author’s practice of gathering together numerous different names of all three teachings (sankyō) and asserting that these different names are in fact synonymous.
Many questions were put forth from the other participants, so much so that we were forced to continue well beyond our scheduled time. It was a lively discussion resulting in several original observations. We would like to thank, first, our two presenters—Baba and Tokumori—for providing us all with such stimulating material, and second, to all those participants whose questions and comments made our discussions so fruitful.
(Matusbara Mai, Specially appointed researcher at Tokyo University)