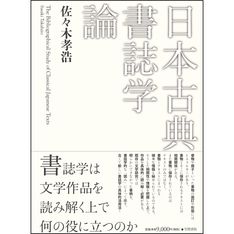 For this first meeting we have invited Dr. Sasaki Takahiro if Keio Universty to talk to us about his monograph Bibliographical Studies and Premodern Japanese Texts (Nihon koten shoshigakuron [Tokyo: Sasama shoin, 2016]).

Meet the Author (2): Summary of Proceedings
The second session of Meet the Author was held on Friday, September 22nd, 2017, at the Komaba Campus of Tokyo University. Despite the rain, this meeting saw the gathering of some thirty attendants. Saitō Mareshi opened the session with a few remarks regarding the purpose of this series of Meet the Author talks. This meeting serves as an opportunity for young researchers to meet with pioneering researchers and ask questions about their most recent work. These discussions will facilitate the promotion of new research and methods in the field of East Asian classical studies. For this, our second session of Meet the Author, we invited Dr. Sasaki Takahiro to speak with us about his recent monograph, Nihon koten shoshigaku ron (Bibliographical Studies and the Japanese Classics, published by Sasama shoin, 2016). Dr. Satō Atsushi of Nihon University and Dr. Yamamoto Yoshitaka of Osaka University served as discussants.

First, Dr. Sasaski provided us with an introduction to the Keio Institute of Oriental Classics (Shidō bunko), of which he is currently an acting member. Aside from Japanese and Chinese classics, this institute contains a variety of classics and other materials from Korea and Vietnam. Next, he explained to us the circumstances leading up to his own research in bibliographical studies. According to Dr. Sasaski, bibliographical studies ought to hold a special place in academia, considering that its findings, which often serve as the foundation upon which other literary studies—such as those focusing on content, for example—are developed, and that new findings in this foundational field may lead to the sudden collapse of long-held theories in related areas. In “‘Excerpts from the Pillow Book’: A Book Unto Itself,” being chapter 2 of part 5 of his monograph, Dr. Sasakai points out the fact that this excerpted work is a perfect example of the real utility of bibliographical studies. While scholars have been able to learn much about manuscripts and the identity of the people who copied them by examining scattered examples of extant calligraphy, still, the systematic study of calligraphy—holography—remains sadly underdeveloped. Furthermore, in relation to this, the publication of highly edited, type-set versions of manuscripts means that readers seldom deal with handwritten medieval manuscripts, a practice which has likewise lead to the neglect of holography. In order to promote the development of bibliographical studies, therefore, Dr. Sasaki stressed the importance of educating the next generation of scholars in the field of holography.
Dr. Sasaki‘s presentation was followed by presentations by each of our discussants. Dr. Satō, our first discussant, in a presentation entitled “Regarding the place of bibliographical studies in the field of classical literature,” summarized the content and value of Dr. Sasaki’s monograph, and posed a number of questions: First, he asked about the ideal relationship between bibliographical and literary studies; second, he asked about the manner in which we ought to approach bibliographic studies in regards to works published, on the one hand, before, and, on the other hand, after the early modern period; third, we asked whether or not it was indeed the case that mass production in early modern Japan had been a major cause in the transformation of book formats. He concluded his presentation by arguing that scholar ought to devote more thought to the question of continuity between the status of Japanese-style bound books (wahon) both before and after the early modern period.
Our second discussant, Dr. Yamamoto, offered a number of comments on Dr. Sasaki’s monograph, particularly those sections dealing with methodology and the details of physical production of books, along with the more general history of books in Japan. In regards to methodology, Dr. Yamamoto emphasized the importance of attempting to gain a more intimate understanding of a writer’s individual style or “feel” by a closer study of his or her extant calligraphy. He enquired into the practice of cultivating a keen appreciation of calligraphic style, whereby one might be able to make informed judgements regarding the particular idiosyncrasies of a given writer. Regarding the details of book production, Dr. Yamamoto enquired into the prestige of so-called blue-cover manuscripts (aobyōshi)—those manuscripts of the Tale of Genji thought to have been either personally written or otherwise owned by Fujiwara no Teika. He asked, in relation to the quarto manuscripts (yotsuhan) belonging to this group, whether or not the occurrence of erroneous omissions in the text might, in fact, have been the result of an aging Teika’s failing vision. He also enquire into the possible relationship between the warrior class and pouch-bound (fukurotoji) manuscripts. Finally, in regards to the general history of books in Japan, Dr. Yamamoto enquired as to whether or not we might, in the case of printed books produced during the early modern period, posit a clear relationship between literary genres and book format, as has already been done for handwritten manuscripts of the earlier period. He asked, on this note, whether or not the dramatic transformation in book format seen throughout the early modern period might not be tied to an equally dramatic transformation in the manner in which genres themselves then came to be conceived. 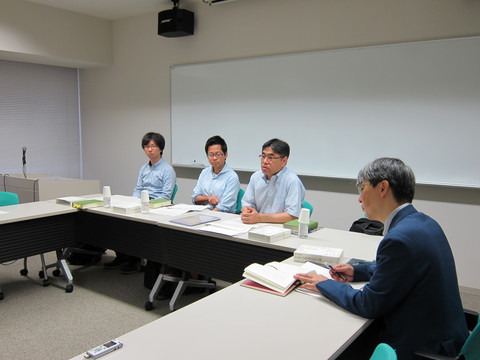 After a short break, we opened the floor up to discussion. Dr. Sasaki responded to comments made by the two discussants. First, in response to the question of book format posed by Dr. Satō, Dr. Sasaki drew our attention to the fact that those books which were vertically long in shape enjoyed higher prestige than those which were more-or-less square in shape. We know this, explained Dr. Sasaki, based on the following two facts: first, vertically long books tended to contain vernacular poetry (waka), while square books tended to contain vernacular fiction (monogatari); second, vertically long books tended to be written in a clearly legible, elegant hand, whereas square books tended to be written in a more mediocre, less artistic hand. The prestige of vertically long books likely lead to the development of a format known as rolled books (kansubon). Dr. Sasaki then went on to remind us about the limitations of digitalized images of manuscripts. Only by looking with our own eyes at actual manuscripts, for example, are we able to make assertions regarding the economic circumstances of a given daimyō, the owners of so many manuscripts in early modern Japan.
After this, Dr. Sasaki took up those questions posed by Dr. Yamamoto. It would appear, according to the data collected thus far, which shows that many of the books written by those of the warrior class were of the pouch-bound format, that, methodologically speaking, there was a relationship between warriors and this particular type of book. Dr. Sasaki, while asserting that, like other fields of study, a keen appreciation of books and calligraphy depends to a great deal on experience, opined that the introduction of certain highly sensitive machinery might very well have the potential to grant us surprising insights. Whatever the case, he asserted that it will be necessary to include in our collection of digitalized images information about the physical feel of paper, its thickness, and its degree of transparency.
Once those concerns posed by our discussants had been properly addressed, we opened the floor up to general questions. Saitō Mareshi, as chairman of the session, raised a question regarding the relationship between pouch-bound format, on the one hand, and Sinitic books (kanseki), on the other, especially when the latter contained illustrations or were printed in movable type. While the content of Sinitic books published in Japan was deeply influenced by continental Chinese models, details concerning illustrations and book format (in Japan) seem less bound to such continental models. Members of the audience, too, raised a number of questions, followed by lively discussions that took our session well beyond the allotted time. This second session of Meet the Author concluded with a word from each of our discussants regarding the importance of bibliographical studies.
As Dr. Sasaki duly noted at the beginning of his presentation, bibliographical studies, despite forming the foundation of much research in a number of fields in the humanities, is often seen as a superficial or merely auxiliary pursuit. While type-set editions and digitalized images of manuscripts have their value, there are important discoveries that can only be made by dealing first-hand with the original manuscripts themselves. Considering the potentially transformative nature of these discoveries, it is time that the scholarly community took the field of bibliographical more seriously. Special thanks are due to Dr. Sasaki, our two discussants, and all those attendants who participated in this session.
Matsubara Mai, specially appointed researcher at Tokyo University