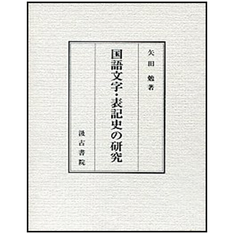 This meeting serves as an opportunity for young researchers to meet with pioneering researchers and ask questions about their most recent work. These discussions will facilitate the promotion of new research and methods in the field of East Asian classical studies.

For this first meeting we have invited Dr. Yada Tsutomu to talk to us about his monograph Research into the History of Japanese Writing (Kokugo moji hyōkishi no kenkyū [Tokyo: Kyūko shoin, 2012]).

Our first session of “Meet the Author” was held on June 25th (Sunday), 2017, at the Komaba Campus of Tokyo University. Some twenty scholars attended, despite the humidity of an early rainy season. This session began with a number of opening remarks by Saitō Mareshi, who presided over the meeting.
“Meet the Author” is a new addition to our current research program, the goal of which is to provide an opportunity for young researchers to meet with pioneering researchers and ask questions about their most recent work. These discussions will facilitate the promotion of new research and methods in the field of East Asian classical studies. For this first meeting we invited Dr. Yada Tsutomu to talk with us about his monograph Research into the History of Japanese Writing (Kokugo moji hyōkishi no kenkyū [Tokyo: Kyūko shoin, 2012]). We invited Satō Kai (graduate student at Tokyo University) and Matsubara Mai (specially appointed researcher at Tokyo University) to serve as our discussants. 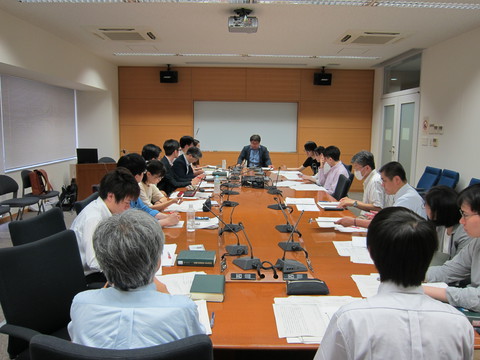 To commence discussion, Dr. Yada presented us with a talk entitled “Some Reflections on my Own Research: Perspectives in the History of Japanese Writing,” wherein he shared with us the circumstances leading up to the writing of this book, as well as possible areas of future research. This talk was then followed by two presentations by our discussants. Sato’s talk, entitled “The Range of Research into the History of Japanese Writing: A Close Look at the Writer of Scripts,” which focused primarily on chapters 2 and 4 in part 2 of Yada’s book, offered a number of comments regarding the content of the book, along with Satō’s own thoughts on the subject. Satō drew our attention to two technical terms used in these chapters, namely, literate society (moji shakai) and categories of writing (shoki hanchū), clarifying their significance in the history of research into Japanese writing, and suggesting possible applications to his own area of specialization, nō theater. Following this, Matsubara gave a talk entitled “Regarding the Concepts of Naturalization and Adaptation of Writing in Yada Tsutomu’s Research into the History of Japanese Writing: A Complex of the Sinitic Grapheme Sphere.” This second talk, which focused on part 1, chapters 2 and 3, part 3, chapter 1, and part 6, chapters 1 and 2, was an attempt to analyze Yada’s book from the two related perspectives of naturalization (junka) and adaptation or re-creation (sōshutsu) of script. After summarizing the content of these chapters, Matsubara shared with us some thoughts in relation to her own specialization, ancient Japanese scripts. 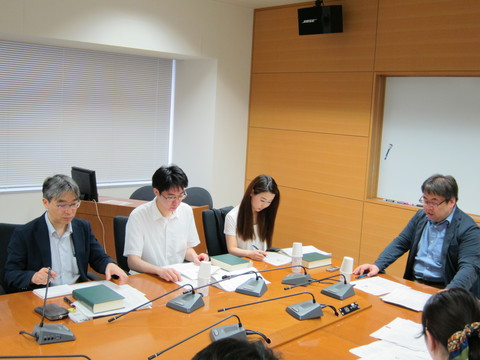 After a short break, we resumed our session with a general discussion. Yada offered some comments and additional explanations in response to what our two discussants had just presented. First, in regards to what Satō had said, Yada confirmed that he had used the term literate society as a means of simultaneously bringing to mind the opposite concept of a non-literate society. He further explained how the term categories of writing was meant to be understood in relation to usage and occasion, and that, consequently, it was possible for a single writer to move fluidly between categories depending on the particular occasion in which he might happen to find himself at any given time. Second, in response to what Matsubara had said regarding ancient Japanese writing, Yada, referring to the sore lack of material from that period, pointed out the fact that it is very difficult to draw any solid conclusions about the exact degree to which ancient Japanese understood and used Sinitic graphemes. He added that more work could be done in relation to the transition from the so-called Man’yō syllabary to the hiragana script of somewhat later ages.
After this, Saitō, who presided over this session, led all participants on a round of numerous questions which, going over the allotted time, brought forth a number of stimulating observations and further discussions. At the beginning of his talk, Yada had urged the need for scholars to include the topic of writing in their academic discussions. This first session of “Meet the Author” did precisely that. We would like to thank Yada and our two discussants for making this a truly stimulating discussion.
Baba Sayuri (specially appointed researcher at Tokyo University)